Looking for past trial exam papers for Physics?

This free Physics trial paper assesses your understanding of the following modules:

This Physics trial paper written for the new syllabus covers modules 5 – 7 as most schools do not include Module 8 in their Physics trial exam.

It is recommended you complete

The most effective way to finalise your exam preparation for Physics is to attempt as many practice papers as possible under exam conditions.

Please read and follow the instructions carefully to avoid any loss of marks:

Copyright © 2020 Learnable Education. All rights reserved. No part of this material may be reproduced, stored in or introduced into a retrieval system or transmitted, in any form, or by any means (electronic, mechanical, photocopying, recording, or otherwise), without the prior permission of Learnable Education.

In Section I of 2020 Physics Trial Paper:

A recently discovered planet has four times the mass and half the radius of Earth. What is the magnitude of the gravitational acceleration on the surface of the planet?

A projectile is launched by a cannon as shown.

Which of the following correctly describes the kinetic energy of the ball at its maximum height?

(A) The kinetic energy is zero at its maximum height.

(B) The kinetic energy is minimum at its maximum height.

(C) The kinetic energy is maximum at its maximum height.

A racing car is travelling at a constant speed on a banked track as shown.

Which of the following represents the acceleration and velocity of the car?

A student carried out an experiment to investigate the relationship between the torque produced by a force and the angle at which the force is applied. A constant force F  was applied to the same position on the handle of a spanner as shown. As the spanner rotated, a high-precision torque meter measured the torque experienced by the bolt.

Which of the following is correct regarding the torque acting on the bolt?

(A) The torque increases linearly as the spanner rotates.

(B) The torque decreases linearly as the spanner rotates.

(C) The torque increases sinusoidally as the spanner rotates.

(D) The torque decreases sinusoidally as the spanner rotates.

The orbit of Halley’s Comet is shown below. 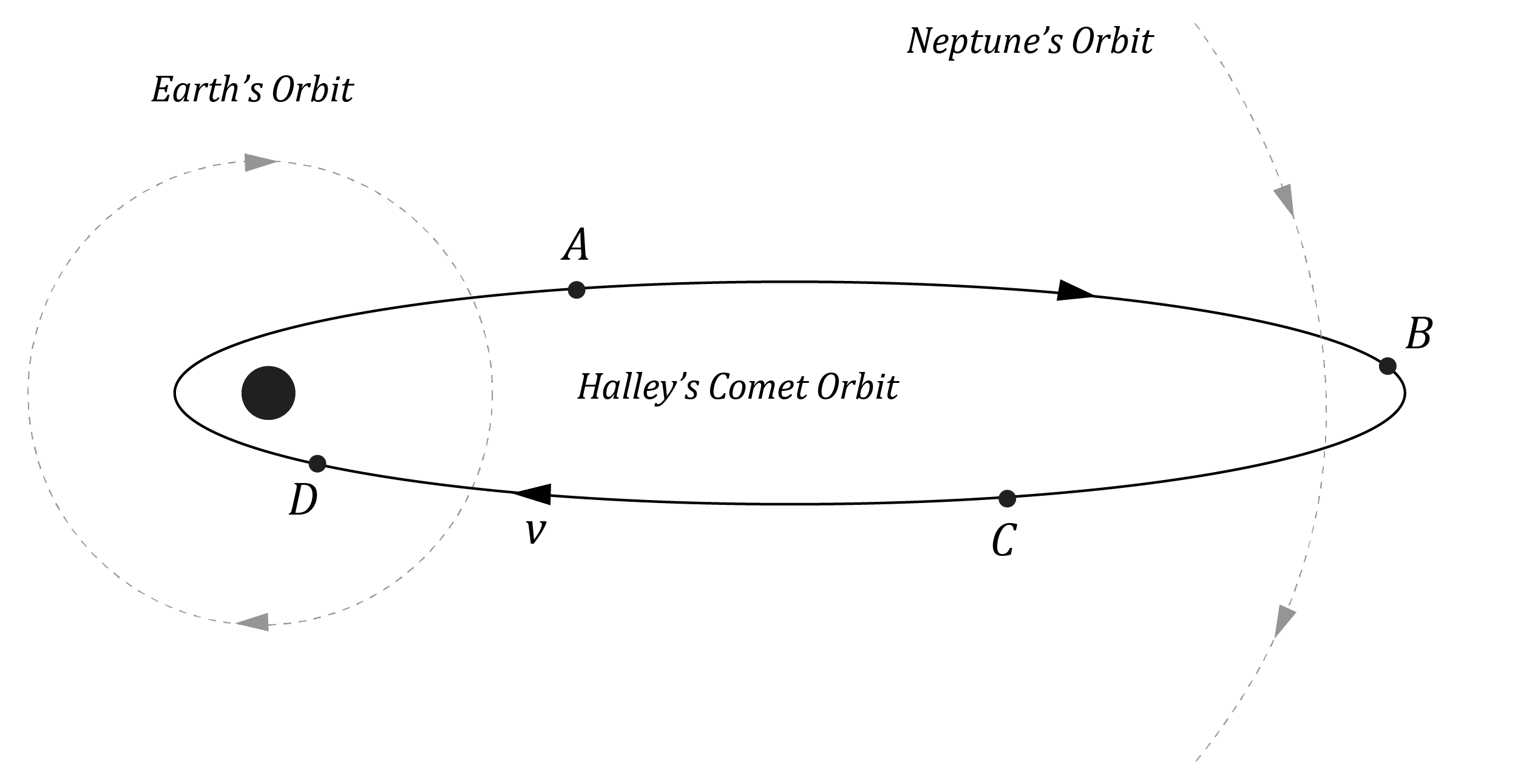 Which of the following regarding the velocity of Halley’s Comet and its total mechanical energy is correct?

A charged oil drop of mass m is placed between two parallel, horizontal plates in a vertical plane as shown.

The diagram below shows observations of the spectrum of a star.

Which of the following explains the changes in the spectrum during the period shown?

(A) The star is moving away from the Earth.

(B) The star is moving towards the Earth.

(C) The star is rotating about its axis.

(D) The star is both moving away from the Earth and moving toward the Earth.

Current flows in two wires P and Q as shown in the diagram. 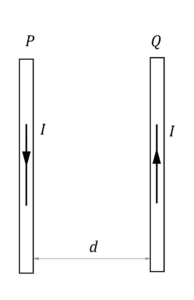 Which of the following correctly predicts the magnetic field direction and force direction at P due to the current in Q?

A straight wire and circular loop of wire are placed next to each other as shown.

The current in the straight wire flows to the right.

A beam of unpolarised light is incident on two parallel polarisers as shown.

Initially, the transmission axes of the polarisers are parallel.

The first polariser is now rotated anticlockwise by 45 degrees. What is the result of this rotation on the intensity and the polarisation axis of the transmitted light I compared to I_{max} ?

Proxima Centauri is a red-dwarf star in the Alpha Centauri system. It emits electromagnetic radiation with a peak wavelength of 953 \ nm .

A student makes the following predictions about Proxima Centauri.

(2) The star is a perfect emitter of electromagnetic radiation.

(3) The star is a perfect absorber of electromagnetic radiation.

Which of the following predictions about Proxima Centauri are correct?

A schematic diagram of a photoelectric effect experiment is shown below. When UV light illuminates a metal surface, photoelectrons are emitted. 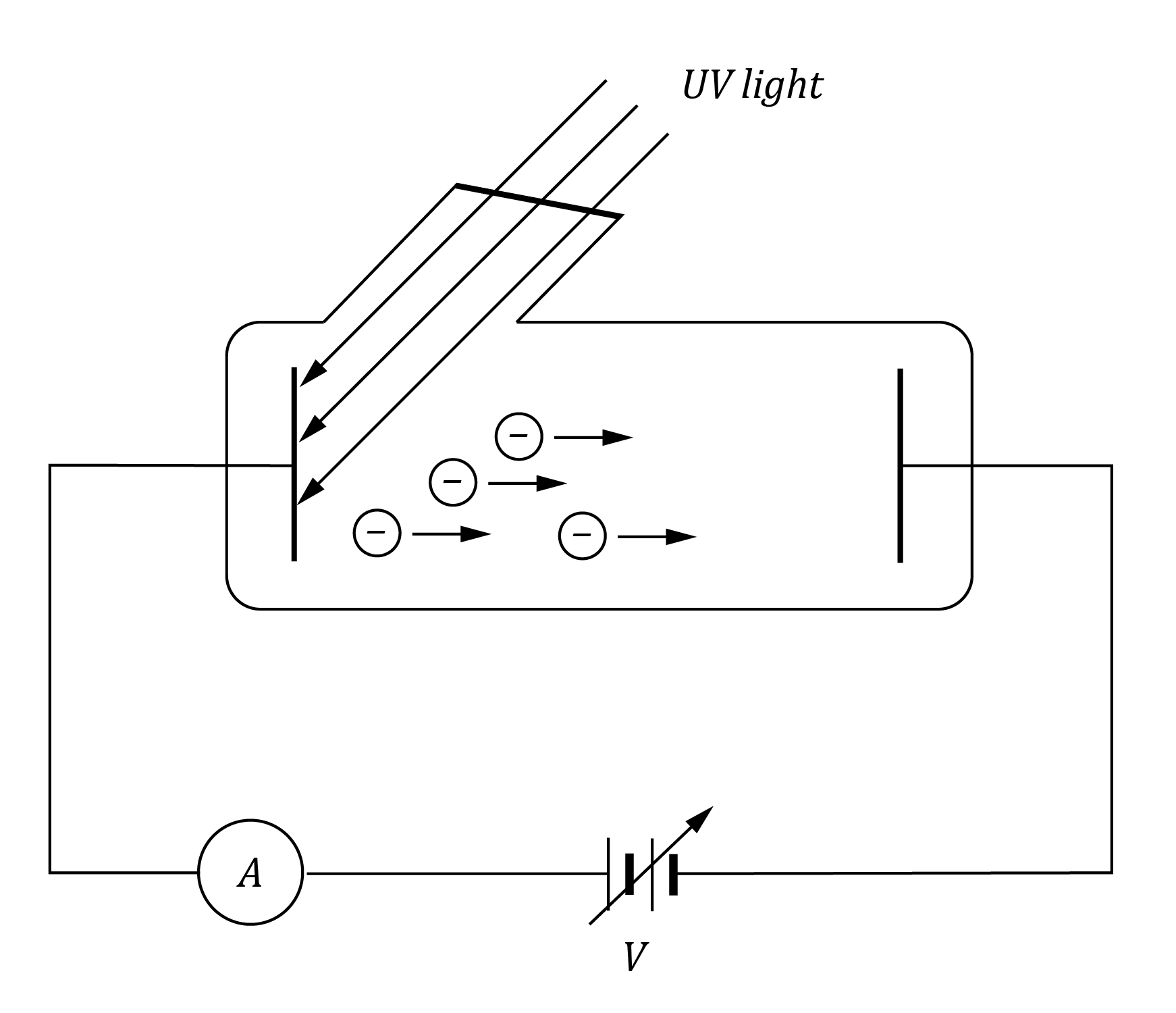 Which of the following changes could cause the photocurrent to stop?

(A) Increasing the potential difference of the power supply.

(B) Increasing the frequency of the UV light.

(C) Increasing the intensity of the UV light.

(D) Changing the metal surface to one with a smaller work function.

Which of the following best describes the method Hertz used to prove that radio waves travel at the speed of light as theorised by Maxwell?

(A) By reflecting the radio waves and measuring the wavelength setup by diffraction.

(B) By reflecting the radio waves and measuring the wavelength setup by interference.

(C) By reflecting the radio waves and measuring the distance between the antinode of standing waves setup by diffraction.

(D) By reflecting the radio waves and measuring the distance between the antinodes of standing waves setup by interference.

The diagram shows a DC motor with curved magnets and a constant current flowing to the rotor. 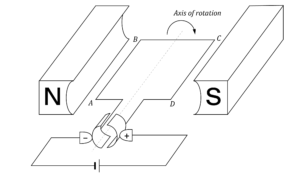 Which pair of graphs best describes the behaviour of the force F on wire AB, and the torque \tau on the rotor as functions of time t?

A student aims to determine the acceleration of a non-inertial frame of reference using a mass suspended from the ceiling of a model train carriage. When the train is accelerating along a straight horizontal surface, the string makes an angle with the vertical as shown.

Which of the following represents the magnitude of the acceleration of the train?

The graph below shows the change in magnetic flux through a coil of wire against time. 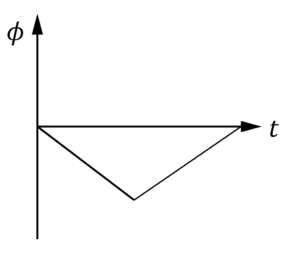 Which one of the of the following graphs best represent how the induced EMF across the coil of wire varies with time?

An electric field accelerates a proton from rest between two parallel plates inside a discharge tube. The proton exits into a region of uniform magnetic field strength of \vec{B} = 0.10 \ T perpendicular to its path, as shown in the diagram below.

Calculate the radius R of the deflection of the proton’s path in the magnetic field.

A UV Lamp emits a wavelength of 400 \ nm . Calculate the minimum number of photons required to transfer at least 31 \ eV of energy.

End of Section I

A ball is released from rest and rolls down a frictionless smooth curved ramp from point P as shown. 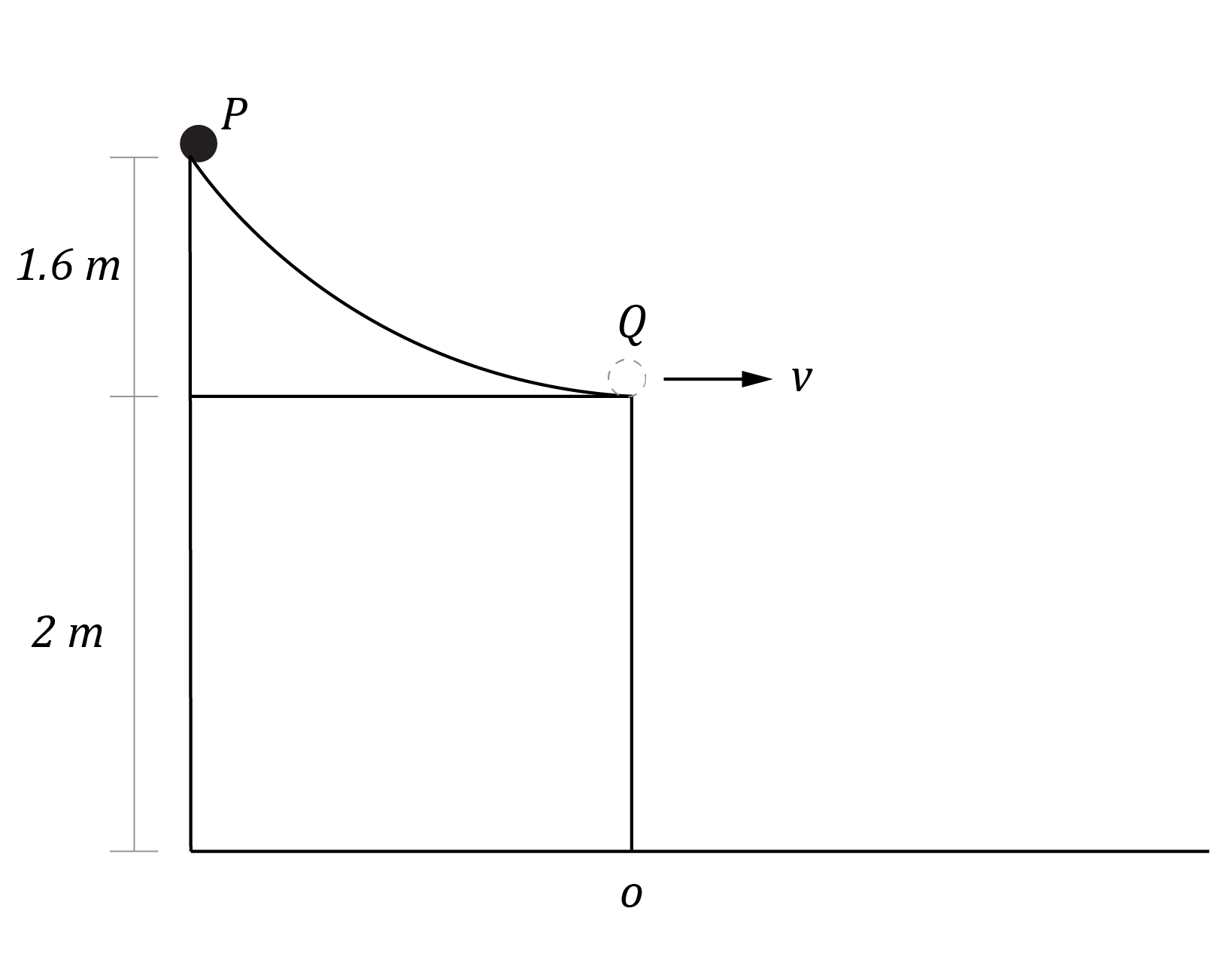 When the ball reaches the bottom of the ramp, it travels horizontally.

The diagram shows a conical pendulum consisting of a ball of mass 100 g on the end of a string of length 0.5 m. 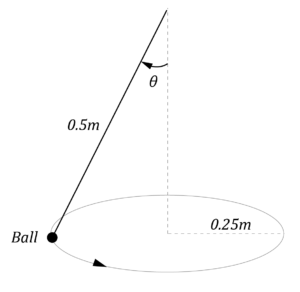 It traces out a circular path of radius 0.25 m.

A loop-de-loop track is shown below. The loop in the track has a radius of 39.2 m. In order to complete the loop-de-loop safely, the car must not lose contact with the track when travelling over the top of the loop, point C. Ignore the effects of air resistance and friction.

A spaceship of mass m is moving at speed v in a circular orbit of radius r around a planet of mass M . 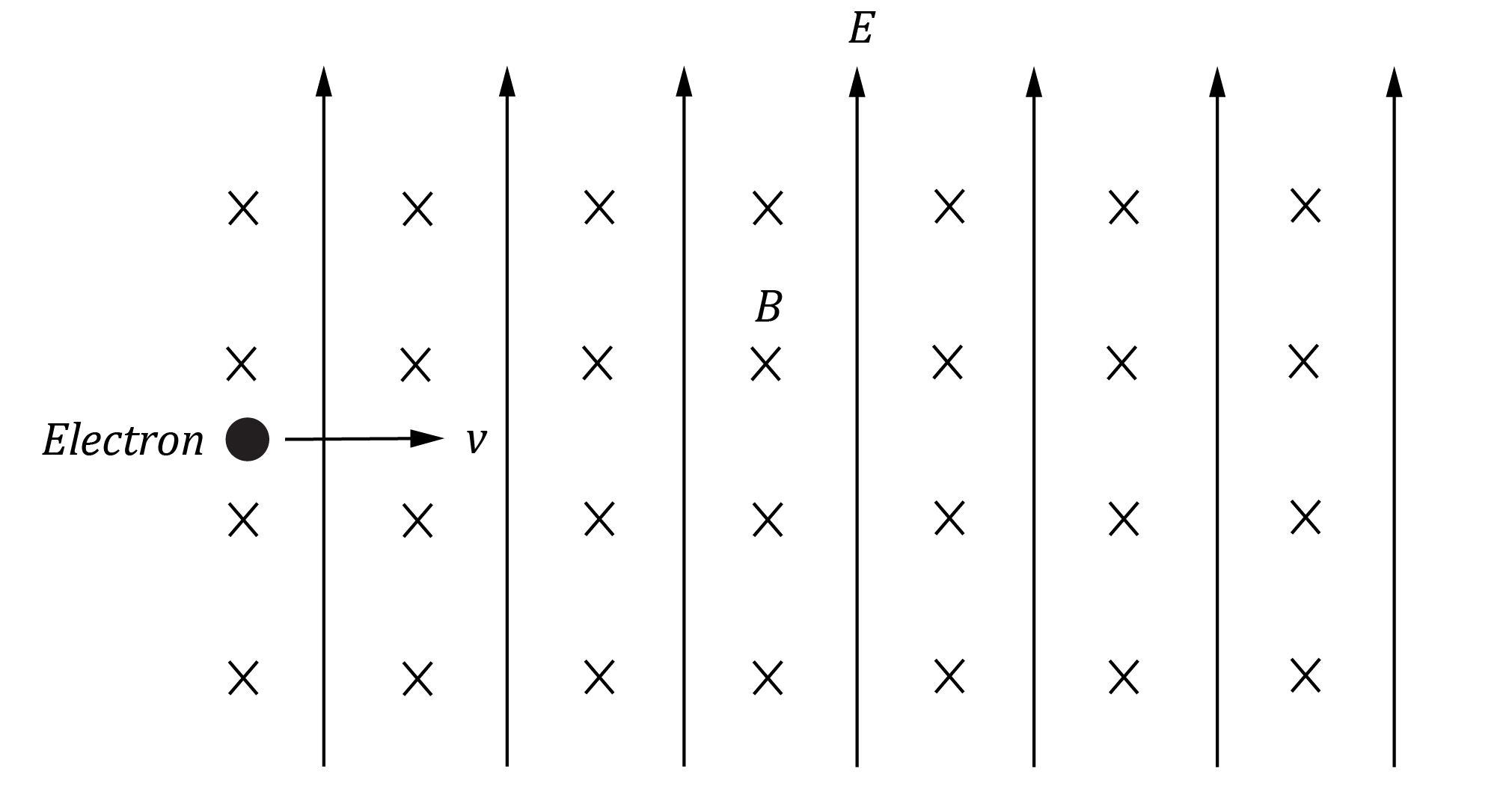 The magnetic field is directed into the page and the electric field is vertically up the page.

A magnet is suspended above a solenoid by a spring as shown. 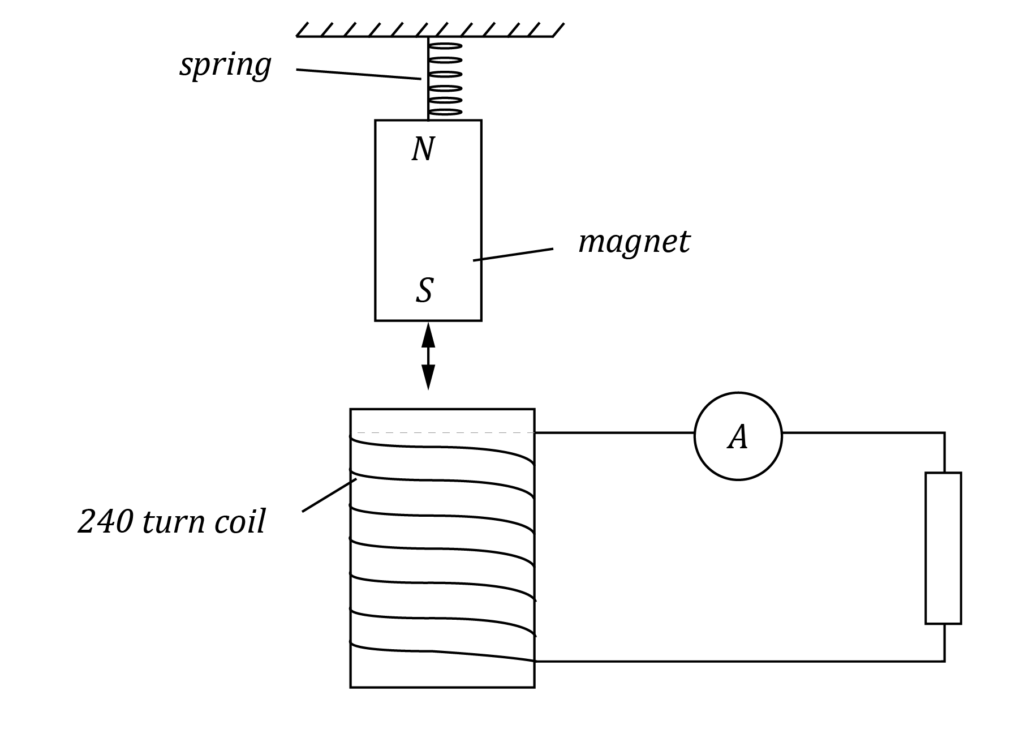 The magnet is displaced vertically down and released. The magnet takes 0.5 \ s to move between tis lowest and highest positions. Ignore any effects of air resistance and friction.

Many electric vehicles such as the Tesla Model 3 use regenerative braking to improve their energy efficiency.

A model of a simple DC generator is shown below, 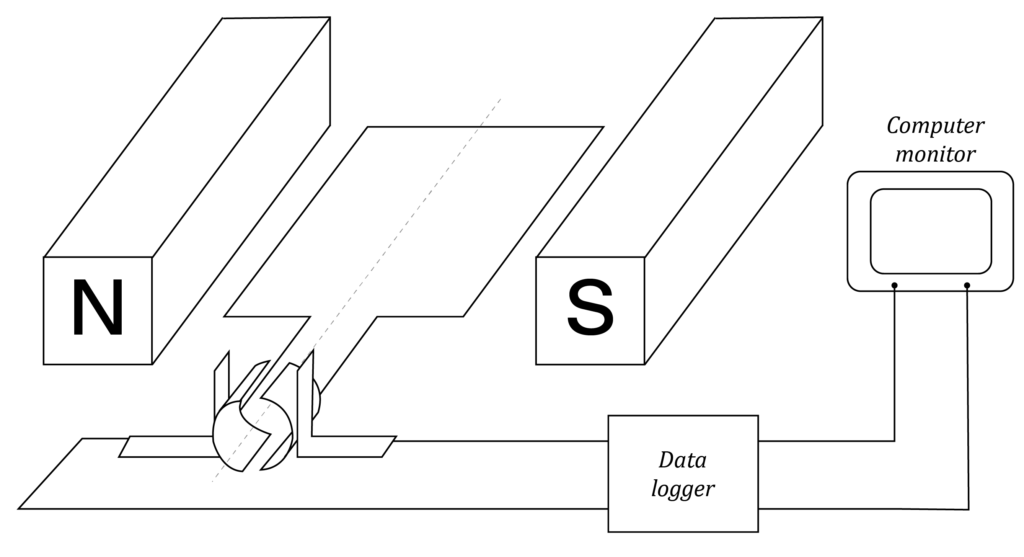 A read laser beam is shone onto two narrow slits S_1 and S_2 in a dark room, and an interference pattern of bright red and dark liens (fringes) appears on a screen, as shown below. The screen is at a large distance L from the slits. C is the central bright maximum. The distance on the screen between C and P represents a distance h .

A plot of several experimentally measured black body radiation spectra is shown in the diagram below, together with the spectrum predicted by classical theory. Spectra can be used to determine the properties of stars,

Students set up an experiment to verify Einstein’s photon theory of light.

wo inertial observers, A and B, agree to compare their measurements of time. They each carry an accurate clock.

During the experiment, A observes B to be moving at a constant velocity, v , as shown below.

A and B observe two events.

The muon is an elementary particle that can travel at relativistic speeds. The mass of the muon as a function of its speed is shown in the graph below. 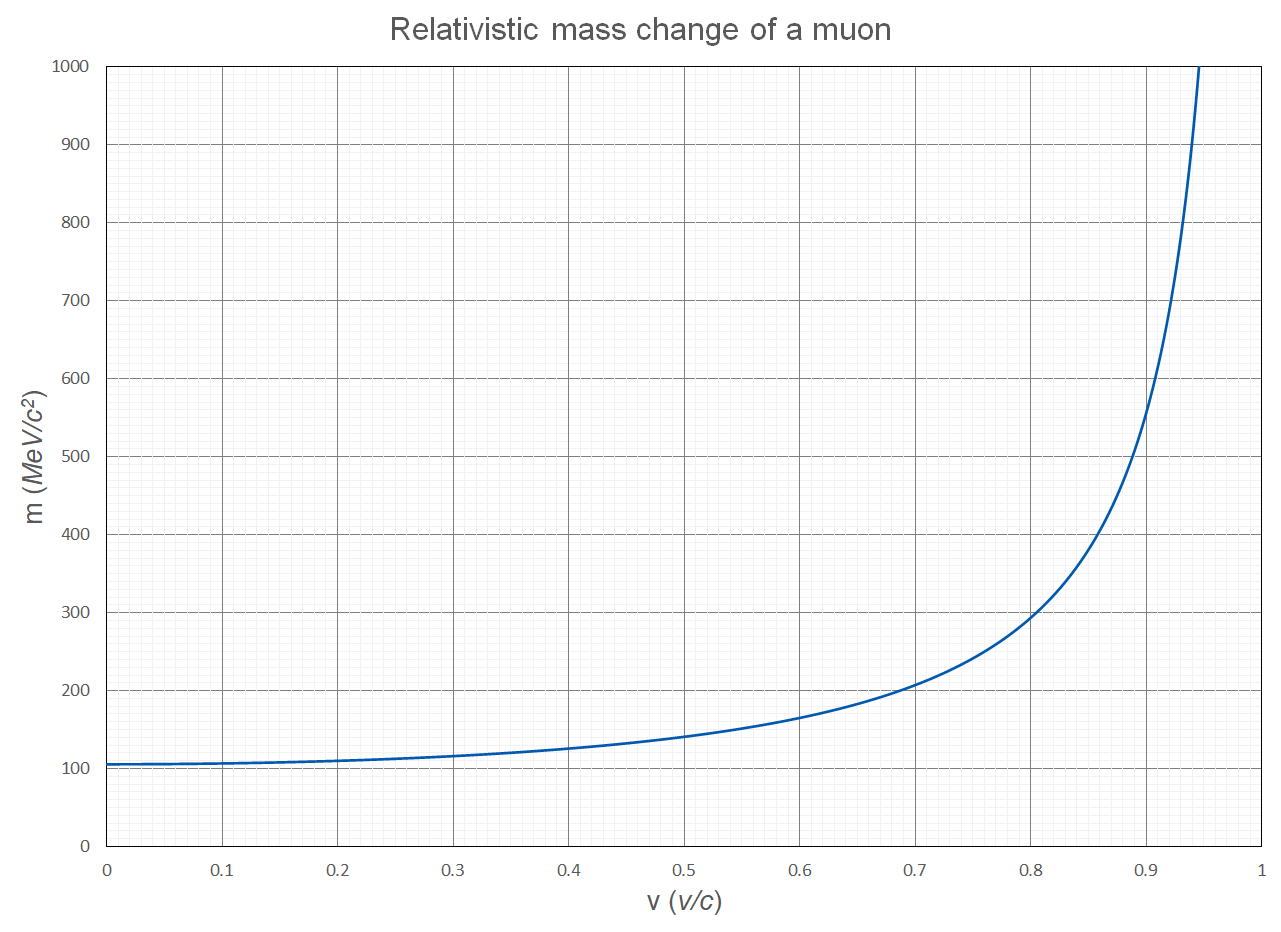 A portable hand-held vacuum cleaner is powered by a brushed DC electric motor and a 25 V battery.

The vacuum cleaner is tested in two different ways to determine its operational efficiency.

The results of the tests are shown in the table below:

Detailed step-by-step solutions for the 2020 Physics Trial Exam Paper are available on Learnable. Please login or create your free account to access the complete solutions. 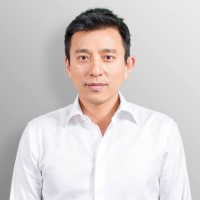 DJ is the founder of Learnable and has a passionate interest in education and technology. He is also the author of Physics resources on Learnable.

Learnable Education and www.learnable.education, 2019. Unauthorised use and/or duplications of this material without express and written permission from this site's author and/or owner is strictly prohibited. Excerpts and links may be used, provided that full and clear credit is given to Learnable Education and www.learnable.education with appropriate and specific direction to the original content.